This four-day IPv6 Deployment Workshop, teaches network operators how to deploy IPv6 on their network infrastructure.

This workshop is being delivered at SANOG 35, please visit the event website for further details and to register – https://sanog.org/sanog35/

It is assumed that the workshop participants know how to use a router command line interface, do basic router configuration and have a working knowledge of an IGP (OSPF or IS-IS) and BGP fundamentals. Knowledge of the IPv6 protocol is helpful but not essential.

This workshop is not an introduction. The lab exercises use Cisco IOS configuration syntax.

Participants are required to bring their own laptops. These can be Windows/Linux/macOS and must have working wireless to allow participation in the hands on lab exercises. 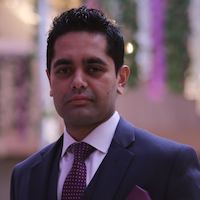 Yasir comes with more than a decade’s experience having worked for ISPs both Pakistan and currently in Australia.

Yasir actively volunteers his time helping setup up critical Internet infrastructure (IXPs) in Pakistan, as well as raising awareness about RPKI and its benefits.

Yasir shares his knowledge as a volunteer community trainer.